Aim of the study: To determine the relation of erythrocytic glutathione with hyperbilirubinemia in newborns

Methods: We studied 45 Libyan full-term newborns (23 male and 22 female) with neonatal hyperbilirubinemia aged from day one to day four born in AlJomhoriya hospital in Benghazi.We excluded each case with pathological jaundice that needs treatment by phototherapy or blood exchange. All investigations concerning this research carried out on each newborn every 24 hours in a period of four days as follow: day 1 up to day 4, day 2 up to day 5, day 3 up to day 6, day 4 up to day 7. We analyzed the total serum bilirubin (TSB) and the level of reduced glutathione (GSH) in red blood cells directly on fresh blood.
Conclusion: Our results show no significant variations in the mean level of erythrocytic glutathione in the jaundiced full-term newborns compared to the control group in the first week of life.

Neonatal jaundice refers to the yellow coloration of the skin and the sclera (whites of the eyes) of newborn babies that result from the accumulation of bilirubin in the skin and mucous membranes. This is associated with a raised level of bilirubin in the circulation, a condition known as hyperbilirubinemia. 1 Some 60% of normal newbornsbecome clinically jaundiced sometime during the 1st week of life. Unconjugated (indirect) hyperbilirubinemia occurs as a result of excessive bilirubin formation and because the neonatal liver cannot clear bilirubin rapidly enough from the blood.2,3

Newborns with jaundice need to be monitored because bilirubin is potentially toxic to the central nervous system. Sufficiently elevated levels of bilirubin can lead to bilirubin encephalopathy and subsequently kernicterus, with devastating, permanent neuro-developmental handicaps.4 Bilirubin is normally cleared from the body by hepatic conjugation with glucuronic acid and elimination in bile in the form of bilirubin glucuronides. Neonatal jaundice stems from a transient deficiency of conjugation (exacerbated in preterm infants) combined with increased turnover of red cells. Pathologic conditions that can increase bilirubin production include isoimmunization, heritable hemolytic disorders,and extravasated blood.5

Method and materials:
We studied 45 Libyan full-term newborns (23 male and 22 female) with neonatal hyperbilirubinemia aged from day one to day four born in Al-Jomhoriya hospital in Benghazi in the period from 1st June 2007 to 30th September 2007. The age-matched subjects were divided into two main groups: The first one, (15) subjects with bilirubin level does not exceed 5.5 mg/dl and clinically not jaundiced chosen as a control group. The second one, (30) subjects chosen as tests with clinical jaundice and bilirubin level between 6 mg/dl and 16 mg/dl. This group was subdivided into two groups as follow:
1. Fifteen newborns without ABO blood group incompatibility named (Non-ABO group).
2. Fifteen newborns with ABO blood group incompatibility named (ABO group). We excluded each case with pathological jaundice that needs treatment by phototherapy or blood exchange. We analyzed the total serum bilirubin and the level of reduced glutathione in RBC and directly on fresh blood.

Estimation of reduced glutathione (GSH) in
RBCs:
Test principle6:
Manual Colorimetric method (Beutler, E, Duron O. and, Kelly B. Improved method for the determination of blood glutathione. Journal of laboratory and clinical medicine. 61: 882, 1963).This method is based on the reduction of 5, 5′
dithiobis (2-nitrobenzoic acid), (Elman’s reagent,DNTB) with glutathione (GSH) to produce a yellow compound. The color which develops is fairly stable for about 10 min and the reaction is little affected by variation in temperature. The reduced chromogen is directly proportional to GSH concentration and its absorbance can be measured at 405 nm. Sample: Fresh blood in EDTA tube.
Reagents:
Reagent 1: precipitating reagent, trichloroacetic acid (TCA) 500mmol/L
Reagent 2: Buffer (Phosphate solution) 100 mmo/L
Reagent 3: 5,5′ dithiobis (2-nitrobenzoic acid) (DNTB) 1.0 mmo/L
Sample Preparation: Plasma and erythrocytes lysate The venous blood was collected using an anticoagulant of EDTA tube. The blood then was centrifuged at 700 – 1000 ҳ g for 10 minutes at 4 °C. The top yellow plasma layer was Pipet off without disturbing the white buffy layer. Store plasma on ice until assaying GSH or freeze at -80 °C. The plasma sample will be stable for at least one month. The white buffy layer was removed and discarded. Lyse the erythrocytes (red blood cells) in 4 times its volume of ice-cold HPLC grade water. The lysate was centrifuged at 4000 ҳ g for 15 minutes at 4 °C. The supernatant was collected for assaying and store on ice. If no assaying on the same day, freeze at -80°C. The sample will be stable for at least one month.

Estimation of total serum bilirubin (TSB):
The Cobas Integra Bilirubin Total (BIL-T) cassette contains an in vitro diagnostic reagent system intended for use on Cobas Integra systems for the quantitative determination of the total bilirubin concentration in serum (test BIL-T, 0-048).

Test Principle: Diazo Method7
Since the absorbance maximum for azobilirubin is pH-dependent, and oxalic acid/sulfanilic acid buffer system is used to maintain the pH of the reaction. The color intensity is proportional to the concentration of total bilirubin in the sample and is determined by monitoring the increase in the absorbance at 552 nm. Reagents-working solutions: (ready for use)
R1: Sulfanilic acid in vial A (liquid)
R2: Nitrite in vial B (liquid).
Calculation:
Cobas Integra analyzers automatically calculate the analyte concentration of each sample.
Conversion factor: µmol x 0.0585= mg/dl
Expected values:
Adults and children: < 1.0 mg / dl
Neonate’s full- term (3 to 5 days): < 12.0 mg /dl
Neonate’s full- term (2 days): < 7.0 mg /dl
Neonate’s full- term (1 days): < 6.0 mg /dl 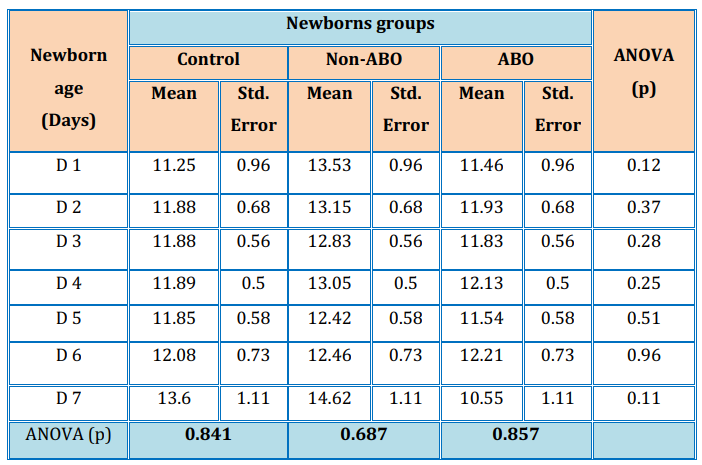 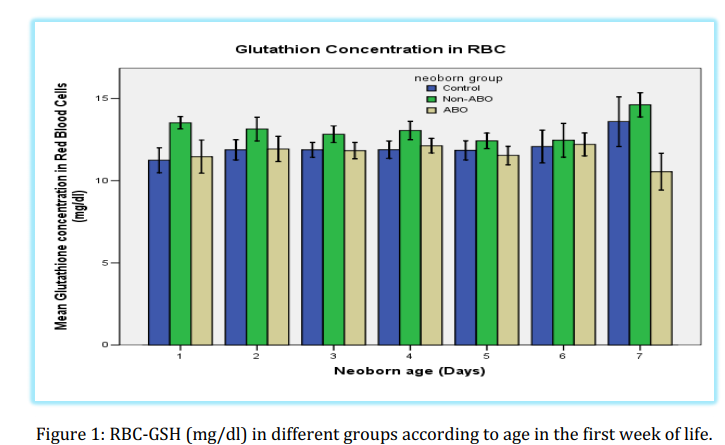 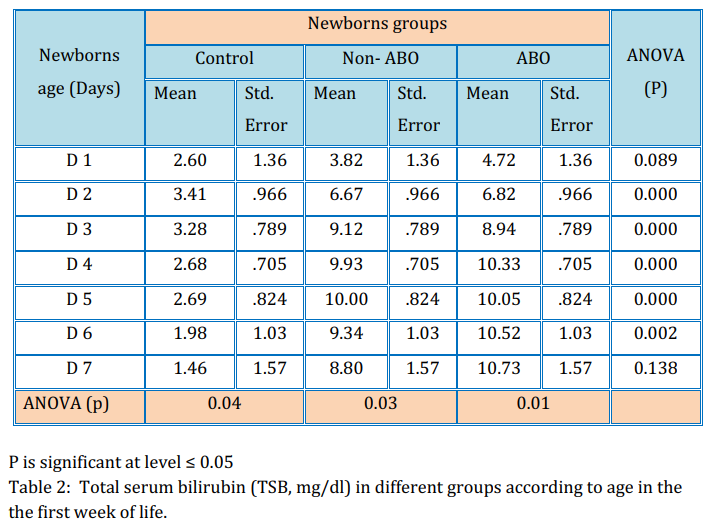 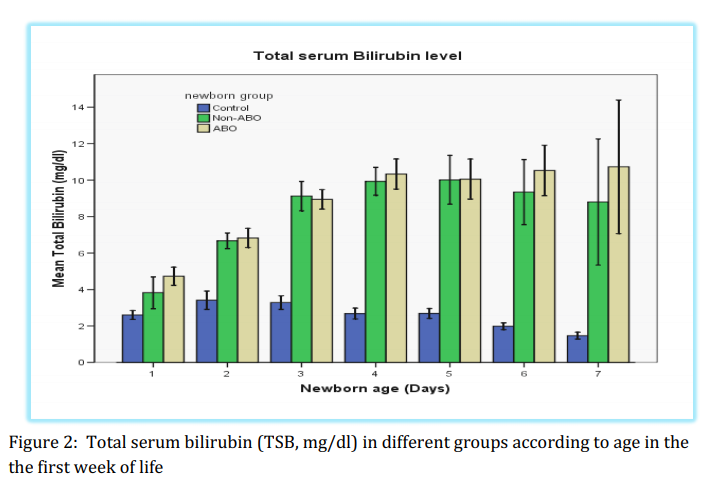 Discussion:
In this prospective study, we aimed to investigate the variation between erythrocytic GSH levels in full-term jaundiced newborns and control group and this could give us an explanation that why some newborns have neonatal jaundice but the others not.

Besides, it has been found from our results that there was no significant difference in the mean level of reduced GSH between days 1 up to day 7 within all three groups (figure 1). Our study findings are in the line with the previously
published study.8

Our study findings are in the line with the previously published report who studied the RBCGSH in the twelve newborns between day 2 and day 5 with physiological jaundice and reported that all the twelve cases except one case showed normal GSH level.9,10

1. Welsh A. London: Published by the Royal College of Obstetricians and Gynaecologists; 2010. Neonatal jaundice.

© 2020 NeuroPharmac J. This is an open-access journal, and articles are distributed under the terms of the Creative Commons AttributionNonCommercial-ShareAlike 4.0 License.