Non-cognitive symptoms are described as neuropsychiatric symptoms or ‘behavioural and psychological symptoms of dementia’ (BPSD), terms that include delusions, hallucinations, depression, anxiety, apathy and a range of behaviours, such as aggression, wandering, disinhibition and agitation. It is suggested that these behaviours may occur in up to 90% of people with AD.[1]-[3] The noncognitive symptoms of dementia are not only distressing and, at times, dangerous for the patient with dementia, but also confer a high degree of burden to those charged with caregiving. Furthermore, psychiatric symptoms of dementia have been found to increase rates of institutionalization and overall financial costs. Successful intervention with behavioral and pharmacologic therapies may help to delay nursing home placement and improve the quality of life for the individual with dementia and their caregivers. [4]-[7]

TGeneral guidelines include the (1) Use environmental interventions first and pharmacotherapy only when necessary; (2) identify and correct underlying causes of disruptive behaviors when possible; (3) start with reduced doses and titrate slowly; (4) monitor closely; (5) periodically attempt to taper and discontinue medication; and (6) document carefully. Avoid anticholinergic psychotropic medications as they may worsen cognition.[8]-[10]

Cholinesterase inhibitors and memantine have shown modest improvement of behavioral symptoms over time but may not significantly reduce acute agitation. [11],[12]

Antipsychotic medications have traditionally been used for disruptive behaviors and neuropsychiatric symptoms, but the risks and benefits must be carefully weighed. A meta-analysis found that only 17% to 18% of dementia patients showed a modest treatment response with atypical antipsychotics. Adverse events (eg, somnolence, extrapyramidal symptoms, abnormal gait, worsening cognition, cerebrovascular events, and increased risk of death) offset advantages. Another systematic review and meta-analysis found small but significant improvement in behavioral symptom scores in patients treated with aripiprazole, olanzapine, and risperidone. Typical antipsychotics may also produce a small increased risk of death, and more severe extrapyramidal effects and hypotension than the atypicals. Antipsychotic treatment in AD patients should rarely be continued beyond 12 weeks.[13]-[15] 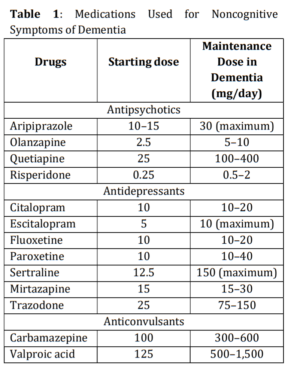 Depression and dementia share many symptoms, and the diagnosis of depression can be difficult, especially later in the course of AD. A selective serotonin reuptake inhibitor (SSRI) is usually given to depressed patients with AD, and the best evidence is for sertraline and citalopram. Tricyclic antidepressants are usually avoided. [16]-[19]

Use of benzodiazepines is not advised except on an “as needed” basis for infrequent episodes of agitation. Carbamazepine, valproic acid, and gabapentin may be alternatives, but evidence is conflicting.[15],[20] 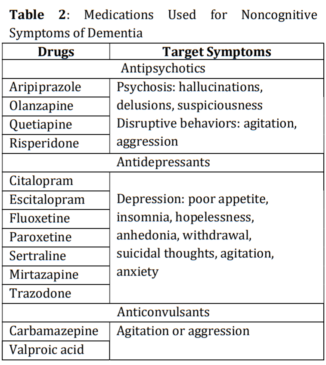 At baseline interview both patient and caregiver, identify target symptoms; define therapeutic goals; and document cognitive status, physical status, functional performance, mood, thought processes, and behavior. The Mini Mental State Examination for cognition, Physical Self-Maintenance Scale for activities of daily living and Neuropsychiatric Inventory Questionnaire for assessment of behavioral disturbances should be used to quantify changes in symptoms and functioning. Observe the patient carefully for potential side effects. The specific side effects to be monitored and the method and frequency of monitoring should be documented. Assess for drug effectiveness, side effects, adherence to regimen, and need for dosage adjustment or change in treatment at least monthly. Several months to 1 year of treatment may be required to determine whether therapy is beneficial. [21]-[23]

How to Cite This Article: Pathan A, Alshahrani A. Alzheimer’s Disease: Pharmacotherapy of noncognitive symptoms NeuroPharmac Journal 2018 January; (01): 47-50
©2022 NeuroPharmac J. This is an open-access journal, and articles are distributed under the terms of the Creative Commons AttributionNonCommercial-ShareAlike 4.0 License.
Spread the love
(Visited 54 times, 1 visits today)
RELATED POSTS
Comparative study between open & closed dressing in healing of burn wound...