Alzheimer disease (AD) is a neurodegenerative disorder marked by cognitive and behavioral impairment that significantly interferes with social and occupational functioning. AD is a progressive and fatal dementia of unknown cause characterized by loss of cognitive and physical functioning, commonly with behavior or cognitive symptoms. Cognitive decline is gradual and includes memory loss, aphasia, apraxia, agnosia, disorientation, and impaired executive function. physicians will often play a major role in diagnosing and treating dementia and related disorders in the community. Accurate treatment of cognitive symptoms is important. Accordingly, we reviewed the available pharmacotherapy in the clinical management of cognitive symptoms of dementia.

Cognitive decline is gradual and includes memory loss, aphasia, apraxia, agnosia, disorientation, and impaired executive function. Other symptoms include depression, psychotic symptoms, aggression, motor hyperactivity, uncooperativeness, wandering, and combativeness. Patients become increasingly unable to care for themselves. Subjective cognitive decline (SCD) is common in older adults and may be an early marker of future cognitive decline. Research suggest that SCD is more closely related to concurrent symptoms of depression.[1], [3] Subjective cognitive decline is indicative of accumulation of early tauopathy in the medial temporal lobe, specifically in the entorhinal cortex, and to a lesser extent, elevated global levels of Aβ. Our findings suggest multiple underlying pathways that motivate SCD that do not necessarily interact to influence SCD endorsement. As such, multiple biological factors must be considered when assessing SCD in clinically healthy older adults.[2], [4] Research increasingly suggests that subjective cognitive decline (SCD) in older adults, in the absence of objective cognitive dysfunction or depression, may be a harbinger of non-normative cognitive decline and eventual progression to dementia.[5] suggest that depressive symptoms, particularly anhedonia and negative affect, are related to cognitive decline in older African Americans.[6], [8] Subjective memory complaints (SMCs) represent a type of complaint made by individuals with cognitive symptoms or complaints but no clear impairment on objective psychometric testing.[9], [12] Evidence suggests that individuals with SMCs may be at increased risk of dementia, with several studies showing that patients with cognitive complaints have a higher rate of progression to mild cognitive impairment (MCI) or AD than those without.[13], [18] Subjective memory impairment (SMI) is receiving increasing attention as a pre-mild cognitive impairment (MCI) condition in the course of the clinical manifestation of Alzheimer disease (AD).[19] The prediction of dementia in AD by SMI with subsequent amnestic MCI supports the model of a consecutive 3-stage clinical manifestation of AD from SMI via MCI to dementia.[20] , [21] The diagnostic criteria of the National Institute on Aging and the Alzheimer’s Association view AD as a spectrum beginning with an asymptomatic preclinical phase progressing to the symptomatic preclinical phase and then to the dementia phase. AD is a clinical diagnosis, based largely on identified symptoms and difficulty with activities of daily living revealed by patient and caregiver interviews. The Folstein Mini-Mental State Examination (MMSE) can help establish a history of deficits in two or more areas of cognition at baseline against which to evaluate change in severity over time (table 1). The average expected decline in an untreated patient is 2 to 4 points per year. 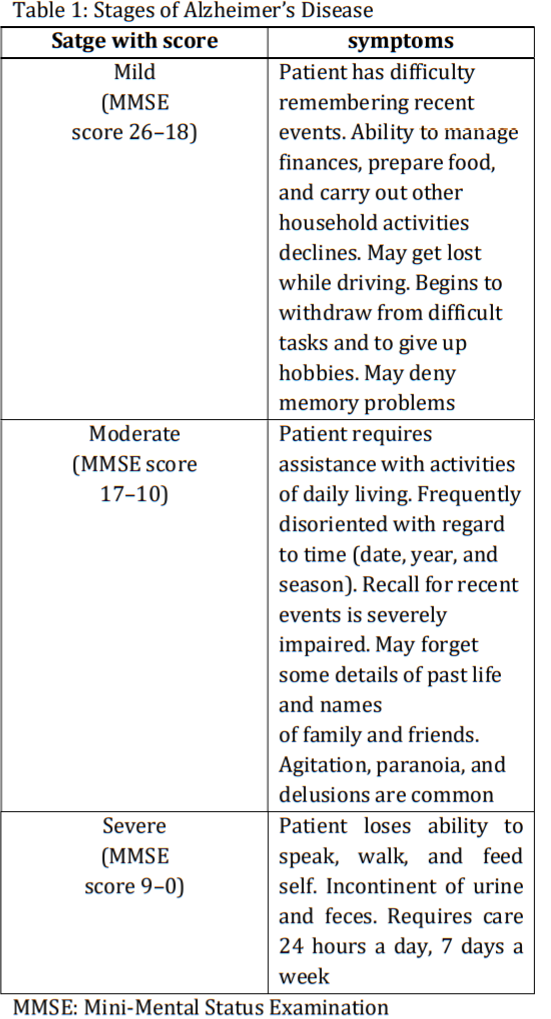 The mainstay of therapy for patients with Alzheimer disease (AD) is the use of centrally acting cholinesterase inhibitors to attempt to compensate for the depletion of acetylcholine (ACh) in the cerebral cortex and hippocampus. A partial Nmethyl-D-aspartate (NMDA) antagonist is approved for treatment of moderate and severe AD. Table 2 summarizes dosing of the cholinesterase inhibitors and memantine. When switching from one cholinesterase inhibitor to another, 1 week washout is generally sufficient. No comparative trials have assessed the effectiveness of one agent over another. Donepezil, rivastigmine, and galantamine are indicated in mild to moderate AD; donepezil is also indicated for severe AD.[22] , [23]

If the decline in MMSE score is more than 2 to 4 points after treatment for 1 year with the initial agent, it is reasonable to change to a different cholinesterase inhibitor. Otherwise, treatment should be continued with the initial medication throughout the course of the illness. The three cholinesterase inhibitors have similar efficacy in mild to moderate AD, and duration of benefit lasts 3 to 12 months. Because of their short half-lives, if rivastigmine or galantamine treatment is interrupted for several days or longer, retitrate starting at the lowest dose. The most frequent adverse effects include mild to moderate gastrointestinal (GI) symptoms (nausea, vomiting, and diarrhea), urinary incontinence, dizziness, headache, syncope, bradycardia, muscle weakness, salivation, and sweating. Abrupt discontinuation can cause worsening of cognition and behavior in some patients. [24] , [29]

Memantine (Namenda) blocks glutamatergic neurotransmission by antagonizing N-methyl-daspartate receptors, which may prevent excitotoxic reactions. It is used as monotherapy and in combination with a cholinesterase inhibitor. It is indicated for treatment of moderate to severe AD, but not for mild AD. It is not metabolized by the liver but is primarily excreted unchanged in the urine. Dosing must be adjusted in patients with renal impairment. It is usually well tolerated; side effects include constipation, confusion, dizziness, and headache. Because of the incidence of side effects and a lack of supporting evidence, neither NSAIDs nor prednisone is recommended for treatment or prevention of AD. Because of limited efficacy data, the potential for adverse effects (eg, nausea, vomiting, diarrhea, headache, dizziness, restlessness, weakness, and hemorrhage), and poor standardization of herbal products, ginkgo biloba is not recommended for prevention or treatment of AD.[30] ,[33] 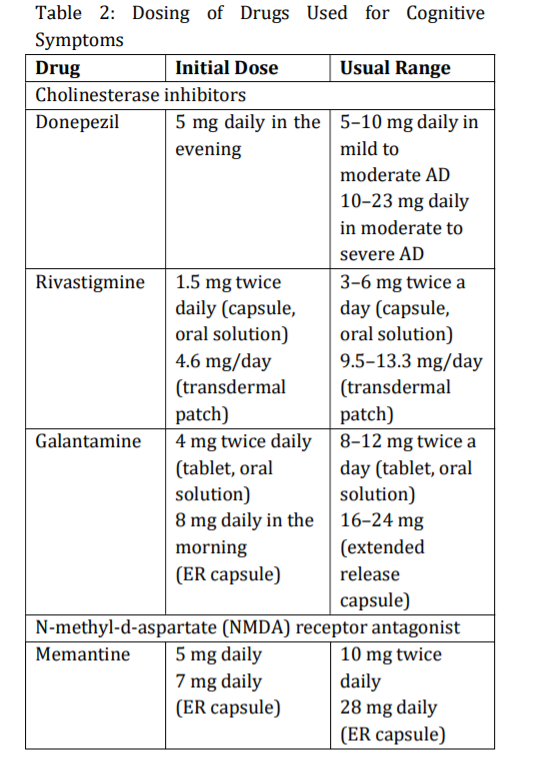 Fixed dose combination capsule containing memantine extended-release and donepezil for patients with moderate-to-severe Alzheimer disease currently stabilized on donepezil 10 mg once daily. Administer once daily in the evening. Starting dose is 7 mg/10 mg PO, taken once a day in the evening Increase dose in 7 mg increments based on the memantine component to the recommended maintenance dose of 28 mg/10 mg once daily. [34]

Medical foods are dietary supplements intended to compensate specific nutritional problems caused by a disease or condition. Caprylidene is a prescription medical food that is metabolized into ketone bodies. The brain can use these ketone bodies for energy when its ability to process glucose is impaired, which brain-imaging scans suggest is the case in AD. [35]

How to Cite This Article: Pathan A. Alshahrani A. Alzheimer’s Disease: Pharmacotherapy of subjective cognitive decline NeuroPharmac Journal 2018 May; (05): 57-62
©2022 NeuroPharmac J. This is an open-access journal, and articles are distributed under the terms of the Creative Commons AttributionNonCommercial-ShareAlike 4.0 License.
Spread the love
(Visited 24 times, 1 visits today)
RELATED POSTS
Zika Virus: A threat to global Public health- WHO Framework Review...