Aim of study: Curcuma caesia (Family: Zingiberaceae) is being used in traditional medicine for the treatment of severe bronchitis and asthma. The aim of study was to evaluate antiasthmatic activity of various extracts of curcuma caesia rhizomes to validate its traditional use.

Materials and methods: In the present study petroleum ether, ethanol and water extract of Curcuma caesia rhizomes at the doses of 25-100 mg/kg i. p. was evaluated for antiasthmatic activity using clonidine induced mast cells degranulation in mice.

Conclusion: It can be concluded that the ethanol extract of Curcuma caesia (CCEE) may be useful in management of asthma.

4. Asthma is a chronic disease characterized by recurrent attacks of breathlessness and wheezing, which vary in severity and frequency from person to person.

Curcuma caesia Roxb. is a member of the family Zingiberaceae and popularly known as Kali haldi. In India it is found in West Bengal, Madhya Pradesh, Orissa, Chhattisgarh, and Uttar Pradesh states. It nourishes well in moist deciduous forest areas. Rhizomes of the plant are used for sprains and bruises and also employed in the preparation of cosmetics.The effective use of Curcuma longa Linn. well known since a long time; it is laxative, anthelmintic, and vulnerary, besides this it is used in blood disorders, leukoderma, scabies, small-pox, and sprains. Curcuma amada Roxb. is useful in bronchitis, asthma, sprains, skin diseases, and in ammation caused due to injuries. The genus Curcuma is a well-known spice of India. It is also called Haldi and more than 200 species and subspecies of it is found all across the world. One of which is Curcuma caesia Family: Zingiberaceae. It is also known as “Kali Haldi.” It is an erect rhizomatous herb with large leaves. Fresh rhizomes are aromatic with intense camphoraceous odour and are applied externally to sprain and bruises. Black Turmeric (Curcuma caesia) is native to North-East and Central India. It is also sparsely found in Papi hills of East Godavari, the root hills of the Himalayas and North Hill forest of Sikkim. The rhizomes of Black Turmeric have a high economic importance owing to its putative medicinal properties.[3],[4] Rhizome large, 5-6 × 9- 10 cm, (Figure 1) blue in the centre, verging towards grey, the blue colour is highly variable, depending upon the nature of the soil and age of the rhizome, strongly aromatic; sessile tubers branched, condensed; roots fleshy; root tubers many, ovate oblong, pale, watery pearl colour. Plants large, 70-100 cm tall, pseudo stem 30-35 cm tall, sheaths green. Leaves distichous, (Figure 2) 79-100 cm; petiole as long as lamina; lamina 30-40 × 10-12 cm, oblong lanceolate, tip acute, base acuminate, glabrous, purple or reddish brown patch along the sides on the distal half of the mid rib on upper side only, fading at maturity, groove of the midrib green. Inflorescence lateral, 25-30 cm long, peduncle 12-18 cm; spike 12-15 × 5 cm; coma bracts large, pink to violet, lower ones streaked green. Fertile bracts 18- 20, 4.5-5 × 4.4-5 cm, lower half used, tip rounded, green with pink tip, each bract subtends a cincinnus of 8-10 flowers.[5,6] The object of the present study was to evaluate antiasthmatic activity of various extracts of curcuma caesia rhizomes by using clonidine induced mast cell degranulation in mice.

Mice were divided into five groups, five animals in each group. A three-day drug treatment schedule was followed. Group-I serves as control receives vehicle only (5 % PEG400, 1ml / kg, i.p.). Group-II receives standard drug disodium cromoglycate (DSCG, 200µg/kg, i.p.). Group-III, IV and V was treated with test extract 25, 50 and 100 mg/kg, i.p. respectively. On day fourth, each animal was injected with 4 ml/kg, 0.9 % saline solution, into peritoneal cavity. By gentle massage, peritoneal fluid was collected after 5 mins and transferred into siliconised test tubes containing 7-10 ml RPMI-1640 buffer medium (pH 7.2-7.4). This solution was then centrifused at 400-500 RPM. Pellet of mast cell was washed with same buffer medium twice by centrifugation, discarding supernatant. These cells were challenged with clonidine (50 g), incubated at 37oC in a water bath for 10 mins. Followed by staining with 1% toluidine blue and observed under microscope (10X). Total 100 cells were counted from different visual area. Percent protection against degranulation was calculated.[8],[9] 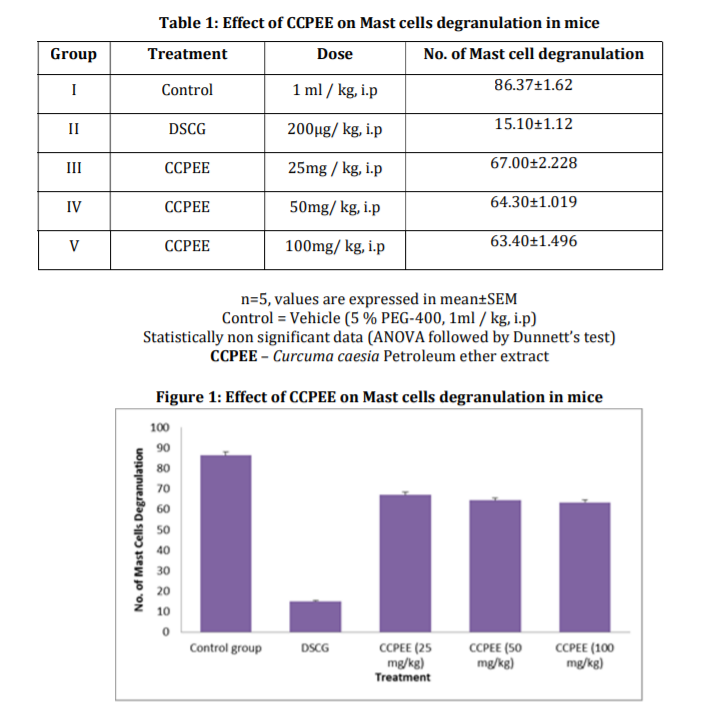 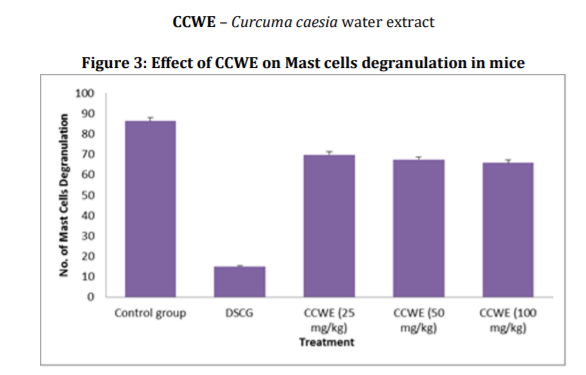 Mast cells are the principal store of histamine and other many chemical mediators responsible for the pathogenesis of asthma. Mast cells are necessary for the development of allergic reactions, through cross liking of their surface receptor for IgE, leading to degranulation and the release of vasoactive, pro-inflammatory and nociceptive mediators. Released mediators from mast cells, each having more than one potent effect on airway inflammation.[10] Upon histological examination, decreased numbers of granulated mast cells have been observed in the airways of patients who died from acute asthma attacks; indicate that mast cell degranulation is a contributing factor in the progression of disease.[11] There is an increased presence of mast cell in the airway smooth muscle in-patient with asthma, because the attraction caused by the secretion of stem cell factor by the muscle. Stem cell factor is chemo attractant for mast cell and is responsible for regulating their growth, function, and survival. Mast cells degranulation is important in the initiation of immediate responses following exposure to allergens.[12] Almost 3-5 times increase in mast cells inpatient of asthma. Once binding of allergen to cell-bound IgE occurs, mediators such as histamine, eosinophils, neutrophils, chemotactic factor LTC4, LTD4, and LTE4, PG, and PAF etc. are released from mast cells. Mast cell degranulation is believed to be an integral cause of exercise-induced bronchospasm following either drying or cooling of the airways.[13] It is known that clonidine releases histamine from mast cells. Clonidine, a α2 adrenoreceptor agonist, induces mast cell degranulation same as of compound 48/80, causes the expulsion of granules without any damage to cell wall in mice. The underlining principle is number of mast cells collected from the peritoneal fluid of mice that degranulate when challenged with clonidine and the percent protection offered by the test extracts compared with standard drug disodium cromoglycate (DSCG) observed under microscope (45 X).[9] in our previous study it was observed that EECC at doses of 100-150 mg/kg significantly decreases milk induced eosinophils and leucocutosis count in dose dependant manner.[5],[6] present study revealed that ethanolic extract of Curcuma caesia shows significant role in mast cell protection against clonidine induced degranulation, while petroleum ether and water extract of Curcuma caesia rhizomes was nonsignificant.