Aim of study: Curcuma zedoaria (Family: Zingiberaceae) is being used in traditional medicine for the treatment of severe bronchitis and asthma. The aim of study was to evaluate antiasthmatic activity of various extracts of curcuma zedoaria rhizomes to validate its traditional use.

Materials and methods: In the present study petroleum ether, ethanol and water extract of Curcuma zedoaria rhizomes at the doses of 25, 50 and 100 mg/kg i. p. was evaluated for antiasthmatic activity using milk induced leukocytosis in mice.

Results: The results of present investigation showed that the ethanol extract of Curcuma zedoaria rhizomes at (100 mg/kg, i. p.) significantly decreases milk induced leukocytosis (1840±104.56) in mice in a dose dependent manner as compared to petroleum ether and water extracts and control group.

Conclusion: It can be concluded that the ethanol extract of Curcuma zedoaria (CZEE) may be used in management of asthma.

The Global Strategy for Asthma Management and Prevention Guidelines define Asthma as ‘a chronic inflammatory disorder of the airways associated with increased airway hyper-responsiveness, recurrent episodes of wheezing, breathlessness, chest tightness, and coughing, particularly at night/early morning’. Airway inflammation produces airflow limitation through acute bronchoconstriction, chronic mucus plug formation and airway wall swelling or remodeling.[1] Asthma comprises a range of heterogeneous phenotypes that differ in presentation, etiology and pathophysiology. The risk factors for each recognized phenotype of Asthma include genetic, environmental and host factors.[2] The conceptual framework for susceptibility factors of Asthma is presented below. Current understanding of the determinants of Asthma have largely been informed through the role of environmental exposures, such as exposure to aeroallergens, indoor and outdoor air pollution, endotoxin, smoking and viral infections.[3] The different ways in which tobacco smoke affects asthma. More recently, this knowledge base has been supplemented by considering genetic modifiers of environmental exposures on Asthma expression.[4],[5] Meanwhile, like most diseases, Asthma also is socially patterned, with lower socio-economic groups, on average, being more burdened.[6] Some suggest that the observed social patterning in Asthma may simply reflect the disproportionate exposure to adverse environmental factors among lower socio-economic groups. [7],[8] The identity of Curcuma zedoaria (Christm) Roscoe and its nomenclatural history are explained. Roscoe wrongly interpreted the basionym of this name and applied his combination to a different taxon, which is not even involved in Christmann’s protologue. The first lectotypification applied the name to the species upon which Rheede’s description of Kua was based. Study of living material reveals that the name C. zedoaria (Christm.) Roscoe is currently applied to several superficially similar taxa in different parts of India and SE Asia and there are no grounds to propose conservation of the name with a different type. To avoid more confusion, the identity of the plant representing C. zedoaria in the sense lectotypified by Burtt (1977) is explained here and a colour plate depicting its morphology is provided. The plant described and depicted by Roxburgh as Curcuma zerumbet Roxb., a name usually cited among synonyms of C. zedoaria (Christm.) Roscoe, is found to represent the taxon that Roscoe had in mind while publishing his combination C. zedoaria (Christm.) Roscoe. Curcuma zerumbet Roxb. is illegitimate however, and as there is no other name available for this taxon it is described here as Curcuma picta. The nomenclatural history of Amomum zerumbet J. König nom. illeg. and Erndlia subpersonata Giseke, names which are involved in the illegitimacy of C. zerumbet Roxb., is explained.[9]

Acute oral toxicity study was performed as per OECD 423 guideline. Extract was administered up to the maximum dose of 2000 mg/kg and animals were observed for mortality.[10]

Mice were divided into five groups, five animals in each group. Animals belonging to Group-I serve as control and treated with vehicle 1ml /kg, i. p. and boiled and cooled milk in a dose of 4 ml /kg, s. c. Animals belonging to Group II received only vehicle (5 % PEG-400, 1ml / kg, i. p.). Animals belonging to Group III, IV and V were received test extracts in a dose of (25, 50,100 mg / kg, i.p.) respectively, 1 hr before milk injection. Blood samples were collected from each mouse from retro-orbital plexus under light ether anesthesia. Total leukocyte count was done in each group before drug administration and 24 hr after milk injection. Blood was sucked in WBC pipette up to mark and further diluted with WBC diluting fluid. Pipette was shaken for few seconds and kept aside for five min. Neubaur’s chamber was charged with above fluid and Total Leukocyte Count was done. Difference in Total leukocytes count before and 24 hr drug administration was calculated.[11] 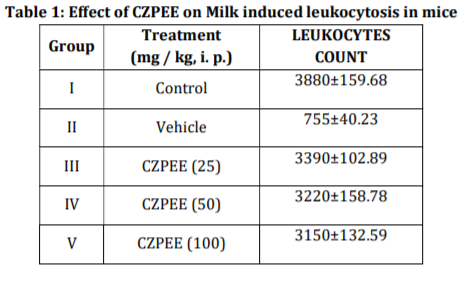 Our previous study indicates that Curcuma caesia ethanolic extract produce significant inhibition in leukocytosis and eosinophil count. [12],[13] In the present investigation Curcuma zedoaria rhizome extracts at doses of (25, 50 and 100 mg/ kg, i. p.) was evaluated for management of asthma using milk induced leukocytosis. Pretreatment with Curcuma zedoaria rhizomes petroleum ether, ethanol, and water extract at all three doses screened for the inhibition of leukocytosis. Only ethanol extract significantly (p<0.05) at 100 mg/ kg i. p was able to inhibit the leukocytosis (1840±104.56). CZEE decreases leukocytes count by normalizing oxidative stress and/or adaptogenic activity, and decrease in eosinophil may reduce type I hypersensitivity in asthma. In conclusion, Curcuma zedoaria ethanol extract is found to be effective in the management of asthma.

The result of this parameter lent support to the indigenous use of Curcuma zedoaria in the treatment of some of the aspects of allergic bronchial asthma as adaptogenics/ antistress agents.