The discovery of da Vinci surgical systems significantly contributed to cancer surgeries worldwide, however, the clinical and oncological outcomes are still debatable. Many retrospective studies have highlighted the advantage of robotic surgery over laparoscopic or open surgical procedures for various cancers, however, more multicentered, coordinated, random clinical trials must be conducted to outline the specific advantages of da Vinci robots. They have been widely used in cancer surgeries, however, higher operative cost and comparable oncological outcomes with laparoscopic approaches further forced manufacturers to come up with affordable and efficient specialized robotic surgery systems. Nevertheless, robotic surgery using da Vinci robots has been widely accepted for hysterectomy and prostatectomy over the laparoscopic procedure and this review briefly discusses da Vinci robots in the surgery of various human cancers and their clinical outcomes.

For the past few decades, minimally invasive surgery (MIS) has been a popular surgical approach for certain cancers due to reduced incision size, less wound trauma, discomfort, recovery time, and cost. Further, many researchers started to use robots to assist surgeons in performing surgeries for better surgical precision. Robotic Surgery (RS) was introduced almost three decades ago and has since been applied for surgery of various cancers. One of the widely used RS in modern times was the da Vinci surgical system which was developed by Intuitive Surgical (USA) in 2000. Later it was approved by the Food and Drug Administration (FDA) for prostatectomies, cardiac valve repair, and gynecological surgeries.[1],[2] Despite being costly along with the software issues, over 5,582 da Vinci surgical systems have been installed worldwide and an estimated >1.2 million surgeries have been performed worldwide till the end of 2020.[3] In the USA, da Vinci robotic surgeries are the leading option for women with gynecologic cancers while some 86% with prostate cancer opted for prostatectomy.[1] This system has been applied in many surgical procedures such as hysterectomy, sacrocolpopexy, prostatectomy, partial nephrectomy, cardiothoracic thoracic surgery, mitral valve repair, hernia repair, colorectal, cholecystectomy, bariatric and transoral surgeries.[3] With better perioperative, oncological, and functional outcomes in robotic surgical procedures seem to be the next evolutionary step in patient safety, high efficacy, and precision surgery.[3]-[11]

Our search resulted in 300 publications and browsing the titles further reduced the numbers to 200 (Figure 1). After assessing the abstracts for duplicate, and irrelevant data to our review scope, an additional 95 were excluded. Out of 70 full-length articles, 15 articles were excluded due to overlapping, irrelevant data and inconclusive data and finally 55 relevant studies (breast cancer, prostate cancer, and gynecological cancers) were included in this review. 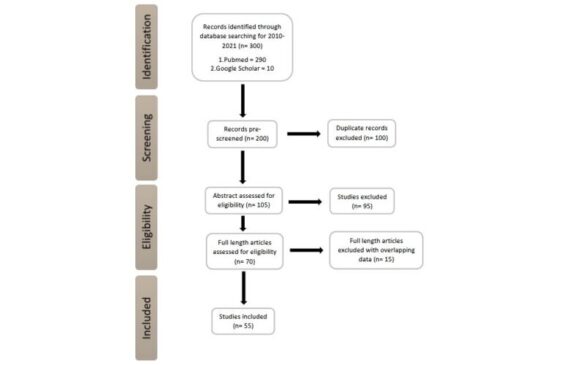 Endoscopic breast operation in an aesthetic sense was an option to achieve full cancer clearance while simultaneously preserving the patient’s physique.[12] Due to inflexible endoscopic equipment and 2- dimensional cameras in this technique has severely limited the maneuverability and insufficient area of the operating field.[13] The da Vinci robotic surgical systems provided a clearer three-dimensional surgical view, minimal incision, stable and flexible mechanical arms, high precision, and lower complication rates and traumatization.[10],[14] Several studies have reported that the nipple-sparing mastectomy may be the valid endoscopic procedure therapeutic mastectomy of breast cancer.[15]-[21] For early breast cancer and benign conditions, a combination of robot-assisted Nipple-sparing Mastectomy (RANSM) along with immediate breast reconstruction (IBR) is a surgically safe and feasible approach.[13],[15]-[21] It has been observed that RANSM combined with IBR resulted in a comparatively better outcome, quick post- operative recovery, and patient satisfaction than the Conventional Nipple-sparing Mastectomy (CNSM) followed by IBR.[14],[22]However, RANSM with IBR has an associated drawback of longer operation time and higher cost. The da Vinci robotic systems could also be used in male mastectomy and internal mammary lymph node biopsy.[23],[24] A recent comparative study revealed that da Vinci robot-assisted axillary lymph node dissection (dVALND) improved the overall quality of life in breast cancer patients by mitigating postoperative complications with minimal local recurrence, metastasis, or aesthetic effect than axillary lymph node dissection (ALND).[25]

Prostatectomy is an extremely delicate surgery requiring high surgical precision because of the presence of blood vessels, muscles, and nerve bundles in very close proximity to each other as well as innervating the erectile and bladder functions. In case of metastasis, prostatectomy is generally not recommended due to its delicate structure. There have been several surgical approaches to implement Robot-Assisted Radical Prostatectomy (RARP) however it is still questionable whether it is oncologically safe.[26] Possible negative outcomes of RARP include erectile dysfunction and Postoperative Prostatectomy Incontinence (PPI).[27] The most used approach is Retzius-sparing RARP which has been effective in quicker recovery from urinary incontinence.[26],[28] Despite this side effect, RARP was opted by 86% of prostate cancer patients in the United States.[1] In a few meta-analysis studies, RARP resulted in better overall short-term outcomes regarding reduced hospital stay and blood loss and oncologically safe compared to LRP or open radical prostatectomy (ORP).[29]-[31] In addition, nerve-sparing, and early recovery from urinary incontinence and erectile dysfunction were also observed.[29]-[31] In a previous report, similar short-term outcomes were observed with no difference in urinary and sexual quality of life in RARP, LRP, or ORP. However, more and more evidence and randomized controlled trials are required to verify the safety of the RARP approach.[32] Generally, percutaneous drainage, sclerosing agents, and surgical marsupialization, are being used as treatment modalities for symptomatic lymphoceles which are typically performed by laparoscopy or with a multiport robotic platform. However, Moschovas et al (2021) used da Vinci single port lymphocelectomy in the treatment of the lymphocele sac, which reduced the number of days with abdominal drains, and decreased surgical invasiveness with fewer incisions, less operative time, and blood loss, and better cosmesis.[33] Further, no intraoperative or postoperative complications were reported.[33] Earlier, Steinberg et al (2019) in a multi-institutional initial case series using magnet-assisted robotic prostatectomy and the Single Port da Vinci robotic platform achieved average operative time, less blood loss, early discharge with no intraoperative or postoperative complications.[34] This report suggested that the combination of Robotic prostatectomy (RP) utilizing the da Vinci Single Port system with the magnetic retractor (Levita™ Magnetic Surgical System, San Mateo, CA, USA), can be effective, feasible, and safe. The magnetic retractor facilitated tissue exposure with improved procedure ergonomics by mimicking the conventional multiport technique. However, the use of magnets in robotic surgery and optimization of assistant port placement for true single-site surgery need to be further explored.[34]

Gynecologic cancers which include cancers of the ovary, uterine, cervical, vulvar, and vaginal are some of the very prominent cancers for females after breast cancer. Based on the stage of cancer, the localization of the tumor, and involvement of other organs in the pelvic cavity, hysterectomy is a widely implemented surgical procedure. Even though the first total laparoscopic radical hysterectomy (TLRH) was performed in 1989, however, till 1992, surgical treatment for gynecological cancers using open surgery (OS) has been the standard procedure.[35],[36] Laparoscopic radical hysterectomy (LRH) proved to be beneficial over the traditional open abdominal approach such as relatively less blood loss, preservation of soft tissues, faster wound healing, and less recovery time.[37],[38] However, patient survival and success rate were the same in both OS and LRH with a difference in a higher cost for LRH.[39] Furthermore, there are inherent ergonomic drawbacks like the posture of the surgeon performing the surgery, the 2D visuals of the surgical site, and the maneuverability of the laparoscopic instruments in LRH.[40],[41] With the approval of the da Vinci surgical system by the USFDA in 2005, the Robot-Assisted Radical Hysterectomy (RARH) for gynecological surgeries was opted by many surgeons due to its superior maneuverability, 3D visualization of the target site, relatively easy learning curve, and better ergonomics compared to the laparoscopic methods.2,[42]-[45] Few randomized controlled trials have reported that the RARH provides superiority over LRH in terms of blood loss, operative time, maneuverability, hospital stay, and postoperative complications.[46]-[48] In recent times, both LRH and RARH have been widely used in the treatment of gynecological cancers for safety, feasibility with comparatively fewer postoperative complications, and better quality of life.[49]-[55]

Since the inception of robotic surgery in 1985, it has been widely used in various fields, due to its high- resolution, several-fold image magnifications with 3D optics enabled intercostal perforators and lymphatics to be accurately visualized and differentiated. The complex and intuitive motion of the robotic arms in da Vinci robots allows surgeons to accurately perform delicate surgeries. On one hand, da Vinci robotic surgical systems provide high precision, shorter hospital stays, less intraoperative blood loss over laparoscopic surgery, however, its higher operational cost and longer operative time with similar oncological outcomes as laparoscopic surgery have been cited in several retrospective studies. Lack of quality randomized multicentered controlled international trials to compare the robotic versus laparoscopic versus open approaches is urgently needed. Nevertheless, da Vinci robotic surgical systems have widely opted in hysterectomy and prostatectomy and to cut down the installation and operative cost, a collaborative Robotics Surgery Hospital can be set up by pooling the resources and manpower from various government and private hospitals. Further, in addition to da Vinci Surgical Systems, several specific robots are being developed such as PRECEYES Surgical System (Preceyes B.V, The Netherlands) and Versius Surgical Systems (CMR Surgical Ltd, UK) for specific surgeries to be cost-effective.

Yusuf Jamal is pursuing an MBBS degree from TNMU, Ukraine.

The authors declare that there are no conflicts of interest relevant to this article.

How to Cite This Article: Jamal Y, Al–Khodairy F. Application of da Vinci robots in the surgery of selected human cancers NeuroPharmac Journal 2021 December; (12): 253-260
©2022 NeuroPharmac J. This is an open-access journal, and articles are distributed under the terms of the Creative Commons AttributionNonCommercial-ShareAlike 4.0 License.
Spread the love
(Visited 52 times, 1 visits today)
RELATED POSTS
Literature review of 10 plants products for their anti-inflammatory, antioxidant, immunomodulatory, ...

Ponesimod oral therapy for the treatment of relapsing forms of multiple sclerosis in adults and its ...

Application of natural antioxidants for the formulation of functional meat products...